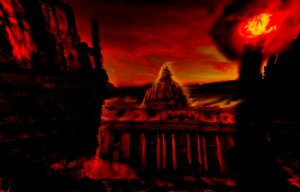 The eye of Sauron

The extreme right, xenophobia and nationalism are gaining ground in many countries in Europe. Sometimes (Belgium), the situation borders on the ridiculous, but no-one dies! In Norway, after a bomb attack on 22 July, a psychopath took his gun and decided the eliminate the perceived enemy himself, so brutally that even the political parties that normally thrive on xenophobia had to distance themselves. There were some well publicized hiccups, though:  in France, Jean-Marie Le Pen (Honorary President of the Front National) suggested that the “naive approach” of the Norwegian government (towards immigration) is more serious than the attacks by Anders Behring Breivik. In Italy, Il Giornale, a newspaper belonging to Berlusconi had to redesign their front page because they “automatically” blamed Islamic terrorism before they realised the aborigenal (note 1) extreme right was the problem. Click here to see how the front page was changed  from sono sempre loro ci attaccano (it’s them again: they are attacking us) to attacco sanguinoso: strage in Norvegia (gruesome attack: massacre in Norway.)

Is there a harmless way of being xenophobic? When does the mention of a person being a foreigner cease to be objective and become xenophobia? When should we start worrying? Italian TV news, for instance, almost systematically mention the nationality of lawbreakers, e.g. “a drunk Belgian driver has seriously injured a child in Naples” or “a gang of six burglers (three of them Moroccans) arrested in Milan”… When the culprit is Italian, he is just Italian; he’s not from Lombardy, Venice or Sicily. Just a plain Italian, almost as ordinary (and harmless?) as you and I.

Racism is very present, but rarely displayed openly. The problem is not new either and some of you may remember Cittadella, a “fortress” (note 6) that fought in 2007  to keep out poor (Peter Popham, in the Independent.) Every now and then, the tension erupts: there have been outright battles between seasonal agricultural labourers (mostly illegal immigrants) and the Italian population, for instance in Rosarno (2010) without leading politicians clearly stating their position, and publicly disapproving of the violence which is largely driven by poverty wages, semi-slave conditions and the mafia.  Note that the pope did condemn the violence.  Human Rights Watch stress that the xenophobia does not specifically target Africans. Asians and Gypsies have also been the victims of “active racisms”; their recent report is a good summary of the situation.

The truth is that  there is a very high level of tolereance for openly racist attitudes in Italy, and xenophobia is now part of the stock-in-trade of many politicians. There is no denying that  xenophobia and homophobia contributed to the election and the re-election of Berlusconi and his friends! They cannot possibly swim against the current and antagonize their voters!

Many Italian newspapers, for instance  La Repubblica, have always clearly condemned racism. What about the Osservatore Romano, the official newspaper of the Vatican State. Good Christians love their neigbours – up to a point. Do they condemn xenophobia when the pope does so? Not sure!  The Osservatore Romano is an interesting mix of Vatican news and views and Italian facts. The Vatican does not hesitate to interfere with Italian politics, and all (well, amost all) Italian politicians like to harvest the extra catholic votes that come with every picture together with the pope.

I buy the paper every now and then because international news and “exotic” places are usually well covered. You don’t go to the Wall Street Journal for liberal views, and you don’t read the Osservatore Romano for advanced positions on population dynamics! Their view is: “Be fruitful and increase in number; fill the earth etc.” That’s a well known programme!

When I read the Osservatore on 20110721 (note 4), I glanced at the usual Be fruitful and increase in number; fill the earth etc. article on the first page (signed by Ettore Gotti Tedeschi). No surprise in the contents: (…) The aging of the population may (…) be considered the true origin of the current economic crisis (…) Fewer people also enter the production cycle and, when they can enter, do it very slowly (…) it is essential to have the courage to address the issue of birth rate and aging population (…) it is high time (…) to support families in their natural vocation to bear children (…). After all, nature itself teaches that if man and woman do not have children it is difficult for someone to take care of them as they grow older. The State can try, but at heavy cost.

Somewhere between the true origin and the courage to address the issue of birth rate, we find The costs of an aging population cannot be promoted by young people; besides their decreasing numbers, they might also wonder why they should do so, especially if immigrants.

How do you read this? To me, the sentence means that immigration is dangerous because immigrants may eventually refuse to pay for “old” Europeans (note 5). Is the statement xenophobic? It is! When I read Church leaders have underlined the broad right to emigrate, the specific rights of refugees and the responsibility of wealthier nations to welcome those in need I cannot help interpreting “wealthier nations” as “some other country, but not here!”.

The catholic (the word means “all-involving” or  universal!) church has sometimes written in a friendly way about immigrants. Replacement migration, for instance  (Note 2) did apparently not create major problems. But when I read the statement above, I cannot help thinking that the Holy See has mixed up its mandate of all-involving love and  its Italian roots!

(1) The word “aboriginal” (latin: ab origine, from the beginning) means “native”, even if it is often used in relation to Australia. I enjoyed using it in the present “Nordic” context. I am sure Anders Breivik, who is so proud of his Viking origins  would be surprised to learn that blue eyes are very new in human evolution. Probably less than 10000 years ago, some “immigrant” underwent a mutation that turned his/her eyes from dark to blue, somewhere north of the Black sea, and as successive waves of immigrants kept moving on, the blue eyes became common in some areas. Fair (“Caucasian”) skin  is probably even more recent (see Eiberg et al., 2008; Science, 2007; Sturm, 2009; White and Rabago-Smith, 2011) .. 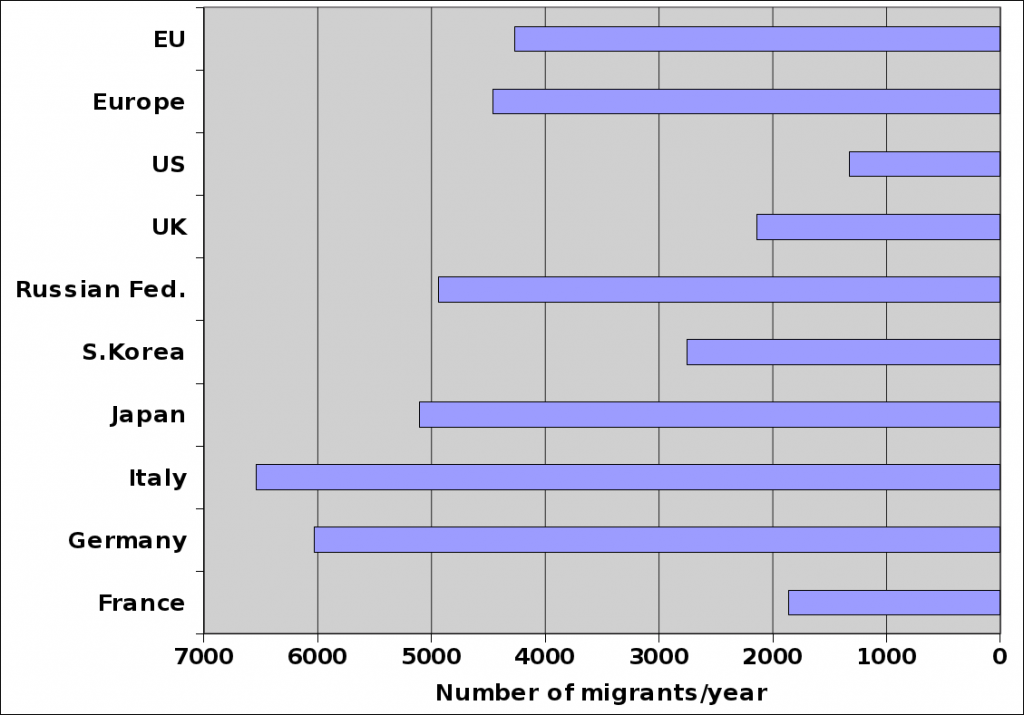 Average net number of migrants between 2000 and 2050 to maintain the size of working-age population, per million inhabitants in 2000. Based on data in http://www.un.org/esa/population/publications/ReplMigED/migration.htm

(2) Replacement migration: the fact that declining birth rates can be compensated by immigration; see wikipedia. The concept was put forward in a report of the UN Population Department in March 2000, but generally not well received in developed countries, for instance Italy, where the issue is particularly serious. See figure.

(3) The internet has many different translations of this passage from Hosea. I selected one which uses ordinary words!

(4) I scanned the page of the Osservatore Romano to a PNG file, and then used YAGF to OCR (optical character recognition) the image into text. Try YAGF if you don’t  t know it: there were extremely few errors.I then pasted the text into Google Translate for an English version. The translation was  perfect, which leads me to believe that Google must have found an exact translation somewhere. I was unable to locate it. Apologies if I stole someone’s work! Let me know.

(5) The concept of “old Europeans” can be understood ad libitum!

20130715: Roberto Calderoli, a Northern League senator, likened the country’s first black minister to an orangutan! In a normal country, Calderoli would be taken to court; in Italy, the prime minister said Calderoli’s statement was “totally inacceptable”. Source: http://www.telegraph.co.uk/news/worldnews/europe/italy/10181191/Italy-race-row-has-shamed-whole-country.html