After “The risky business of forecasting“, which focused on  natural disasters, here is a note that looks more closely at the broader picture of our societies. It reviews different articles that have recently shown some skill in forcasting the future. The first comprises of simple power law equations the coefficients of which have been empirically determined over several orders of magnitude. The underlying models are at the border of diverse disciplines, from ecology to sociology. Next comes  the systematic monitoring of the news of which we now have many digital sources available, an approach known as culturomics. Finally, we have a revival of the old methods of critical thresholds which was popular among the old polemologists à la Bouthoul (1962). The exceedence of the thresholds triggers qualitative changes, for instance in the case of riots associated with food prices.

Can the future be predicted based on an analysis that combines history, sociology, and mathematical statistics to make general predictions about the future behaviour of very large groups of people (See note 1)? It seems it can, as illustrated by many recent publications.

Let us start with a couple of articles published about two years ago by Bohorquez et al. (2009) and by Johnson et al. (2011). The authors of the first paper are engineers, physicists and an economist.  At the time of the publication, Bohorquez was working at the Department 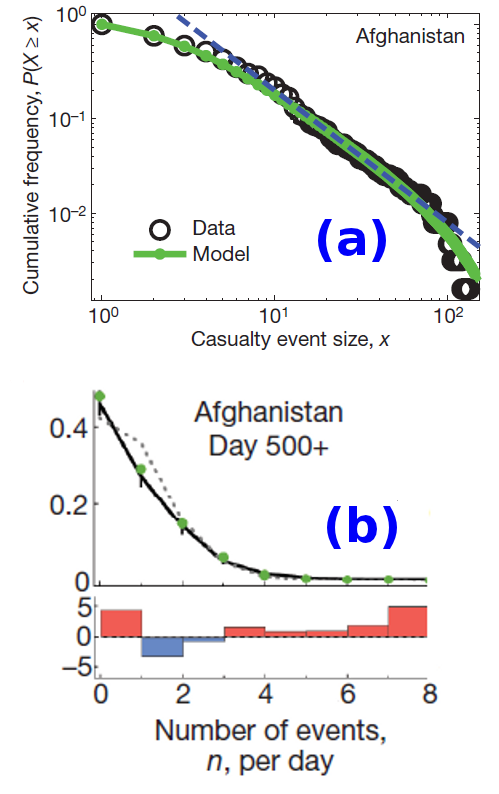 (a) Accumulated frequency of war actions (events) in Afgha­nistan as a function of the number of casualties and (b) number of such actions after the 500th day of operations. Figure based on two different figures in Bohor­quez et al. , 2009. See note 2.

of Industrial Engineering and CEIBA Complex Systems Research Center à l’Universidad de Los Andes at Bogota, Colombia. The scientists that co-sign the paper by Johnson include a larger number of disciplines, from biology to sociology, computer sciences and physics. Johnson himself is a physiscist at the univerasity of Miami. Also note that the two groups collaborate.

What’s in the articles? To start with, there is a very simple power law that describes the interval between terrorist attacks (or war actions). This interval tends to keep shrinking while the terrorists learn their “jobs”. If the law is known, the date of the next attack can be inferred (with some uncertainty, of course). There is also a simple relation between the magnitude of the attacks and their frequency: the frequency decreases in inverse proportion to the magnitude at the power of 2.5  (Gilbert, 2009).

The merit of those studies is that they quantitavely relate some violent (as well as non-violent) human behaviours (i.e. they apply beyond terrorism), ecology and some economic models (don’t forget “eco” is a common denominator between eco-logy and eco-nomics!). They are reminiscent of other studies that use power laws to link the size of cities (expressed by their number of inhabitants) and a varied collection of indicators, from average salary to the number of inventors and from the power consumption of households to the density of petrol stations (Bettencourt et al., 2007; Bettencourt and West, 2011). These studies can be used to “predict” how some variables will vary in, say, 2050. This is because many indicators are directly related to population (independent variable). It happens that future population numbers are rather predictable since the majority of people who will be living in 2050 have already been born. Compared with other projections, populations tend to be amazingly accurate at the global scale (see, for instance Chi, 2009).

Recently, some authors (esp. Leetaru, 2011), have adopted a radically different approach to forecasting, based on the fact that we can now avail ourselves of huge digital databases of the written press, news agencies, not to mention the websites of national and international newspapers and magazines.  The databases cover at least thirty years. Using data mining techniques, it is possible to retreive certain terms, their frequencies, asociation with other terms, as well as their tone and geolocation. Tone and geolocation are the two innovations introduced by Leetaru. The tone (mood would be a better term!) is given by “positive” and “negative”  terms such as “terrible”, “improvement” or “happy”. Geolocation simply associates geographic coordinates with the above-mentioned terms. The approach, which Leetaru calls “culturomics” has enabled him to issue short-term forecasts about the revolutions in  Egypt, Tunisia and  Lybia, to see the conflict build up in Serbia and to forecast the stability of Saudi Arabia until at least 2012. When applied to the whereabouts of Osama bin Laden, the method identifies an area that includes Abbotabad where the US raid eventually caught up with him. 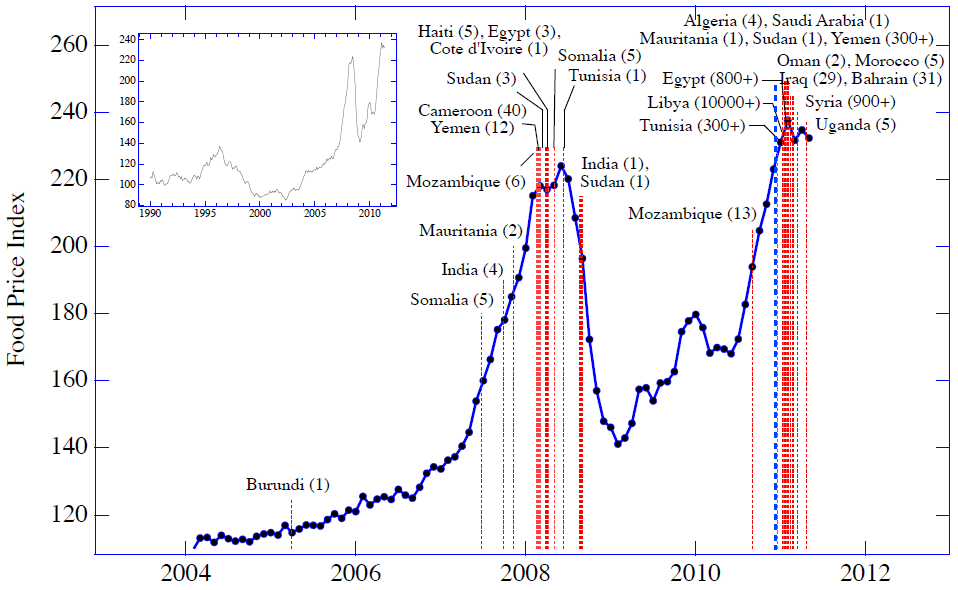 Chronology of riots/revolutions since 2004 as a function of food prices. Figure from Lagi et al., 2011.

I’ll conclude by quoting a study by  Lagi et al. (2011) that attracted considerable attention, a very readable account of which is given by  E.M. Johnson, 2011 The authors have abserved a historical association between riots and the cost of food. The threshold above which problems start is about  220 $/ton in current US$ and about 190 US$/ton in constant 2004 prices. The threshold was exceeded  in 2008, and again during the Arab spring. If current food price trend persist, the next revolutions are expected between July 2012 and August  2013.

Altogether, the methods are rather promising; the attention triggered by the papers by  Leetari, Lagi et those that originate in the “school” of Geoffrey West testify to the interest of forecasts for the  scientifc community and the press at large. It seems, however, that the performance of the methods has more to do with the volume of data now available than with the  methods themselves. Somehow, the methods all rely on the easy access to data provided by the internet. For instance, the paper by Leetaru did not suffer from its publication in a rather confidentail website. The global village does exist!

Note 1 : This note is a wink at all science-fiction lovers! The wording is borrowed, with minor changes, from  Wikipedia: Psychohistory is a fictional science in Isaac Asimov‘s Foundation universe which combines history, sociology, and mathematical statistics to make general predictions about the future behavior of very large groups of people, such as the Galactic Empire. It was first introduced in the five short stories (1942–1944) which would later be collected as the 1951 novel Foundation. According to the French edition of Wikipedia, the term was was coined by Nat Schachner and later adopted by Asimov.

Note 2 : The top part of the figure (a) indicates that  100% of war actions result in 1 casualty, while 1/1000 are resposnible for 100 casualties. Lower part (b):  8 events per day alnmmost never happen, while 30% of the days are characterised by two events.

Gilbert, N. 2009. Modellers claim wars are predictable.Insurgent attacks follow a universal pattern of timing and casualties. Nature 462:836. This article is a presentation of the one by Bohorquez et al., 2009.

Johnson, E.M. 2011. Freedom to Riot: On the Evolution of Collective Violence.

I liked this post. It shows not only how the number and the quality of data are important in the science of forecasting, but also shows how we are influenced par data that are not independant from the phenomenn to be forecasted. I would like to respond to Culturomics par of the post. We all know how much information on the internet and also in the newspapers is polluted (influenced) by the influential groups and intelligence agencies, who aim at leading people to some events that are in preparation. The goal is of course to test if the event in preparation is acceptable, and otherwise make it more acceptable. The techniques are well known: repetition of keywords, rumors, stirring fear, etc.. Culturomics art, is a science that only schematize this psychological preparation which is carried out by invisible agencies. However, Culturomics is interesting in the way that it can detect these hidden preparations , which are sometimes invisible to most of us.