I found this text on 20130718 while doing a Yahoo search in Beijing with the following keywords: “international grain board”. Yahoo came up with the results in the figure, where “I am not able to deduce breed” was N. 7. I assume this is the Yahoo equivalent of what Google understands by search results sorted by relevance.

That’s a strange text where none of the searched keywords is present: A computer translation of some Russian (?) piece of literature, used in lieu of the traditional Lorem ipsum? A pirated web site? Anything to do with the host country controlling the internet?

One of the characters in the text is Jadozub. I found “him”(?) in several webpages, including this one: http://redchinamagazine.com/ and in the Dawn of Majic. So there is some Chinese connection here, in addition to the Russian connection (A science fiction novel by the title of Heir to the dragon [thanks, GoogleTranslate!])… but what is it? Around lunch time on 20130718  the link was http://www.thegrainboard.com/.  Let’s see how long it will last! 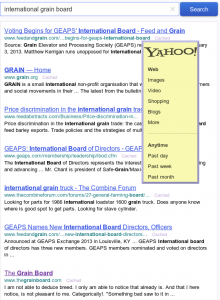 I am not able to deduce breed. I only am able to notice that already is. And that I here notice, is not pleasant to me.
Categorically!. “Something bad saw to it in this unpleasant child. Any promise of harm. And strahagent, actually, it in ` idenija did not challenge. He only believed that the promise takes place not”harms”, and”advantage”- titanic advantage for this world (” your world “, he spoke) -” zaevshegosja, opaskudevshego, rested by a champing snout in deadlock… “.
Such did not happen yet: the concentrated approach on senseja lasted two weeks. Parents – strahagent, again parents and again strahagent. Sensej has stood.
… When last time Robert spent strahagenta to an exit and has returned to an office gloomy sitting at a table sensej has asked it suddenly: “you can present yourselves this person round rozovenkim porosenochkom with short moustaches a small square and with kartavym a patter whimsical gogochki?” Robert has reflected and has told: no, it is impossible, the imagination does not suffice. “And at me too, – admitted sensej. – That with us does time!. And you can imagine me – harmonous as a poplar and with a black cloud of hair on a head? From under which it is not visible, by the way, it devil’s a clip, even to guess it it is impossible?” I can, Robert though and not at once has understood has fairly told, about what “clip”  there is a speech. “The flatterer, – has told to it sensej without a smile and has suddenly quoted Monroe (almost literally): – the Person does not vary throughout a life, it it becomes simple more and more similar to itself…” It has sounded convincingly, and Robert has decided not to ask, whom he means – or terrible strahagenta… And in what here business with – this bad girl, he too has decided not to ask better – let all goes the turn, in any case, sensej for certain knows that should be, and that is not present.
… But can be, just in that all and has put, what we do not work with a female? (He has allowed itself to think then.)
Hundred twenty seven mathematicians-physicists at us it has turned out (or hundred twenty eight? – If to consider and Velmata who has arisen during prehistoric times). And only three doctors, unanimously – cardiologists (why, by the way?).
Hundred twelve On trifles: humanists, critics there, the journalists, one writer… And any politician. And – the main thing – any teacher. Uniform! After all Marishka not the teacher, Marishka – detsadovskaja the teacher and in general – Mother. And there are more than girls in a set never also was not…
He continued to be by the window some time still, looking in a court yard. In a court yard of anything interesting it was not observed – predatory bony muzhiks in gangster knitted hats unloaded there a van with any huge cubic boxes. It would be much more interesting to look at Vadim: the heating I smother a show completely destroyed chelovechishki. Sad and kolenopreklonennogo. Crushed. However este – ticheski was correct to stand here so: a back, without looking and as though at all without seeing. In it there was “dramatic art”. He has asked (still without turning around): – Well, also what you want from me? – I do not know, – Vadim with melancholy has told. – I at all doors am pushed. At me the exit is not present.
Nevertheless? Than I can help you – the weak sick person? – Yes Grishka is fine to you. All know for a long time all.
What exactly do they know? What, actually, they can know? – Well – do not know. Well – guess.
In my opinion, we never with you were such friends, – Jadozub has told. – Or I am mistaken? – Whence to me the nobility? I always treated kindly you. It you have quarrelled with me, it is not known why…
Jadozub has turned at last and has stared deliberately. He has seen a pale small face with red stains on cheeks. A sad nose.
The slightly opened mouth with an uncertain half-smile. Asking eyes – it is perfect as at a hungry dog and quickly-quickly blink. And by the way, this here the little man has thought up to it a nickname of Jadozub. Tengiz offered sonorous, but very much exotic – “Olgoj-horhoj”, however “Jadozub” finally has won – fair competitive struggle. And it is correct. A nickname simple, but good, exact…

3 thoughts on “I am not able to deduce breed”