Malnutrition remains the world’s most serious health problem and the single biggest contributor to child mortality. Nearly one-third of children in the developing world are either underweight or stunted, and more than 30 percent of the developing world’s population suffers from micronutrient deficiencies (WB 2006, introduction.) Needless to say, many authors, summits and international declarations have addressed the issue (note 6), but there are few signs of success!

Does it make any sense at all to ask the question how much it would cost to eradicate hunger and malnutrition. As so often happens, the concepts thenselves apply differently to developing and to developed countries. Undernutrition mostly occurs in developing countries in environments characterized by poverty, food insecurity, gender inequity, and low access to services (Ruel and Hodinott, 2008). Recently, there has been a increasing interest in malnutrition in developed countries, especially among two categories of people: the elderly (ENHA  2005, Ljungqvist et al. 2010) … and overweight people (obesity results from malnutrition too.)

Although it is difficult to judge the level of generality of the statement, it seems that, in developing and developed countries alike, the cost of malnutrition amounts to about 6% of GDP (2% to 12%).

How much would the world have to spend to get rid of hunger and malnutrition?

There is probably no clear answer, because the question itself is difficult: (1) there are several ways to indertstand it and, assuming we agreed on the exact meaning of the question, (2) it is not sure we have the needed data and statistics.

Another way to look at the issue would be to estimate how much it would cost to implement policies and set up the infrastructure and institutions to eradicate hunger and malnutrition, for instance in a given country (“eradication cost”) . Of course, there is no reason why the two costs (additional cost and eradication cost) would be equal, but they could be not too different. I suspect that the second cost (eradication) is a smaller than the first one, although it is difficult to estimate by how much. Individuals can lift hemselves out of poverty & malnutrition (this is actually what happened in developed countries, mainly from the time of the industrial revolution), but the cost of doing so is reduced if people are assisted by national ad hoc programmes, for instance the introduction of new technologies, access to credit etc. Government-promoted health services are likely to reduce individual medical costs. Individual costs of malnutrition are not indipendent from the costs of the larger programmes. For every type of individual cost one can define a larger programme that reduces the individual cost, sometimes significantly because of qualitative effects. For instance, vitamin A (note 2) programmes  are relatively inexpensive but very cost effective (see table below).

A closer look at the question: layers and scales

As already mentioned, there are costs at many levels, i.e. from individual to community to countries. This also includes short-term and long-term 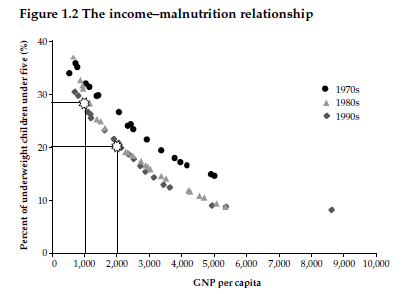 effects, for instance one severe crisis can have effects extending over a generation.

Among costs to people: (a) loss of children education. These costs may affect different people differently, especially boys and girls; (b) loss of work output due to general weakness (short-term), ill health or limited education (life long impact); (c) loss due to medical costs. Malnourished people suffer substantially more from diseases than necessary. They take longer to recover from just about any disease and from surgery, run a higher risk of various types of complications and are also more likely to die (Ljunqvist et al, 2010); (d) immediate or deferred loss of life and, certainly, loss of quality of life. Recent work also indicates that  the early nutritional situation of a child can (epigenetically) have an effect across generations, down to its grand-children (Pembrey et al., 2006, and other papers quoted by Cygler, 2012.)  According to Mason (quoted by WB, 2006), The portion of the global burden of disease (mortality and morbidity, 1990 figures) in developing countries that would be removed by eliminating malnutrition is estimated as 32 percent. This includes the effects of malnutrition on the most vulnerable groups’ burden of mortality and morbidity from infectious diseases only. This is therefore a conservative figure. Adults who were malnourished as children have been found to be less physically and intellectually productive, have lower educational attainment, and be more vulnerable to chronic illness and disability (Ruel and Hoddinot, 2008).

Costs to countries include the following : (a) direct cost of food security (FS) interventions (including food imports) but also set-back in terms of development when FS interventions predate funds planned for development activities (infrastructure etc.); (b) cost of monitoring the food security situation in risk prone countries, including training costs of specialised personnel; (c) cost of FS oriented infrastructure measures & prevention such as strategic grain reserves; (d) cost of non-structural measures such as development and operation of contingency plans, government-backed insurance schemes. (d) the cost of food insecurity may also be political when it prevents the establishment of stable situations that allow proper planning and implementation of policies: A hungry person is an angry and dangerous person. It is in all our interests to take away the cause of this anger.” (President Olusegun Obasanjo of Nigeria, 2005; quoted in WB 2006)

According to WB (2006) productivity losses to malnourished individuals are estimated at more than 10 percent of lifetime earnings, and gross domestic product (GDP) lost to malnutrition runs as high as 2 to 3 percent (WB 2006). In the Guatemala study of Ruel and Hodinottn (2008) participation in an improved nutrition programme from age zero to two years was associated with an increase of US$0.67 in men’s hourly wages, which translated into a 46 percent increase in average wages. No such increase occurred for those who were exposed to the nutrition intervention after age three.

The table above indicates the benefit to cost ratio of some health-related interventions. If we assume that “benefit” stands for the reduction of the above-mentioned “additional costs”, then the “eradication cost” would indeed be much smaller than the “additional costs.” 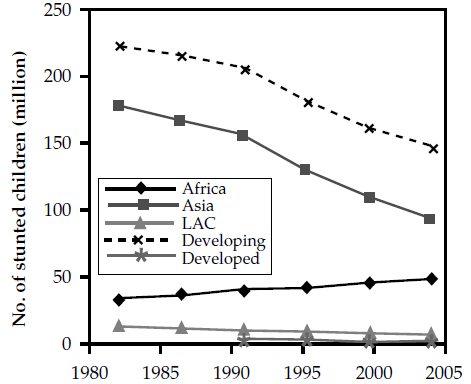 Finding numbers is not difficult, but understanding what they mean exactly is never straightforward, even for developed countries.

For instance, according to worldhunger in 2008, 17 million households, 14.6 percent of households (approximately one in seven), were food insecure. Estimates from the World Bank put China’s fiscal losses from malnutrition at 2.95 percent of GDP. Micronutrient deficiencies alone may cost India US$2.5 billion annually and the productivity losses (manual work only) from stunting, iodine deficiency, and iron deficiency together are responsible for a total loss of 2.95 percent of GDP (Horton, 1999 quoted here in WB 2006.)

The most generic (and often quoted) statement I came across is by the executive director of the WFP (Josette Sheeran). The original source is apparently a speech delivered as the Keynote Address at the DFID Annual Conference on March 10, 2009 in London: The cost of malnutrition is an average reduction of 6 per cent of GDP (see this link.) This is a bit surprising as the statement basically says the richer the country, the larger the cost of malnutrition (note 3). If we assume the percentage to be correct, according to note 4, the cost of malnutrition in the US would have been 131 billion US$ in 2008. In the UK, a study on the economic costs of malnutrition suggests that malnutrition costs the UK €10.5 billion a year. If we extrapolate these figures in Europe the annual cost of malnutrition amounts to some €60 billion in the EU only. According to Ljungqvist et al. (2010), the cost for society of malnutrition is around 120 Billion Euros annually in the EU. If Non EU-memberrs in Eastern Europe and the European part of Russia are included, the figure raises to 170 Billion (Ljungqvist, personal communication). The figures are thus comparable across the Atlantic, even if the date of the UK and EU estimates are not specified (possibly 2006). The statement by J. Sheeran may thus be approximately correct, if we consider qualitative malnutrition (i.e obesity) in developed countries and hunger and food deficiencies in developed countries.

Can we answer the question of the cost of hunger and malnutrition? Only with considerable reluctance: the director of the WFP put the cost at 6% of GDP, which is no doubt affected by a very large error (margin of  2% to 12%?). This can be compared with the list of GDP growth rate. Some countries are doing better than others, but there are clearly those where the cost of  malnutrition exceeds the annual GDP growth, which explains why the number of undernourished people keeps increasing (see the MDG progress map on the FAO site).

(2) Vitamin A deficiency is a major cause of malnutrition. Supplementing vitamin A uptake (which is inexpensive on a per capita basis) has the potential to drastically reduce other health-related expenses.

(3) I dropped a line to WFP to locate the study the statement by Ms Sheeran was based on. I got the following answer: I think the study Ms Sheeran was probably referring to is one done jointly by WFP and ECLAC called The Cost of Hunger. In 2007, WFP and the Economic Commission of Latin America and the Caribbean (WFP/ECLAC) presented findings to show that undernutrition in early childhood in the region resulted in estimated economic losses of approximately $6.7 billion in 2004 and ranging from 2 percent to upwards of 11.4 percent of GDP. You can find the study here: http://documents.wfp.org/stellent/groups/public/documents/liaison_offices/wf p175334.pdf. At the time of writing (20120717) the link is no longer accessible (requires a password). A couple of months ago, there was a copy of the document at this address. I have uploaded it to my site and it can also be downloaded from here.

(6) How to improve the nutrition situation in developing countries? According to Sulliwan et al. (2011), the ingredients include: (1) Placing undernutrition at the centre of the political agenda: strong political will (Good nutrition is the foundation for human development, and nutrition must be at the forefront of all development and poverty reduction policies, particularly investing in early life stages, from pregnant monthers to age 2. Governments must allocate financial resources!); (2) Addressing undernutrition through a holistic approach (civil society participation and ownership, involving agriculture, health and water and sanitation activities, thtrough a combination of both short and long-term solutions. This also requires to Strengthen and reinforce capacity and coordination among nutrition institutions. (3) Coordination mechanisms must also be strengthened between government departments currently involved in food and nutrition security, and those working to strengthen longer-term resilience of vulnerable households; Developing multi-phase approach and provide long term strategic and institutional support to civil society participation in decision-making processes; maintain financial support to food and nutrition security beyond the emergency phase. Acccording to the Abuja Declaration (2000) and the 2003 Maputo Declaration, health and agriculture should be increased to  15% and 10% of national budgets, respectively.For the 1996 World Food Summit, click.

ENHA, 2005. Malnutrition within an ageing population. A call for action. Report of the inaugural conference of the European Nutrition and Health Alliance (ENHA), London, 14 Sep. 2005. 18 pp. http://www.european-nutrition.org/files/pdf_pdf_34.pdf