Many African countries have established and operate dedicated institutions dealing with remote sensing, mapping, GIS, GPS, warning systems and other geomatics applications. In addition, at the initiative of groups of countries, regional development associations such as CILSS and SADC, the Africa Union, UNECA (UN Economic Commision for Africa) and NEPAD (AU New Partnership for Africa’s Development) they have established regional organisations to serve operational (e.g. mapping) or longer-term development goals. This post lists the major ones.

UNECA meetings and governing bodies have frequently discussed geo-spatial data requirements (UNECA, 2007) and cartography, e.g. the Ninth United Nations Regional Cartographic Conference for Africa (2007) but also the early 1996 Africa Information Society Initiative (AISI): An Action Framework to Build Africa’s Information and communication Infrastructure. AISI set some ambitious goals for the African society, including widely available access to international, regional and national “information highways” to boost health, education, culture, trade and to reduce the nefarious impacts of food insecurity and disasters. In 2014, the UNECA vision about geo-information is to ensure that spatial data (and information products) permeate every aspect of society and that they be available to people who need them, when they need them, and in a form that they can use to make decisions with minimal pre-processing (UNECA, 2008).

AfriGEOSS is the most recent of the listed intitiatives, as it was created in 2013 to promote the bilateral and multilateral participation of African countries in EO-based initiatives across Africa, and especially contribute to the Global Earth Observation System of Systems (GEOSS). Specific objectives include a better use of resources through pooling of knowledge and sharing of experiences, facilitating and promoting access to GEOSS, identification of gaps and the development of a communication strategy. 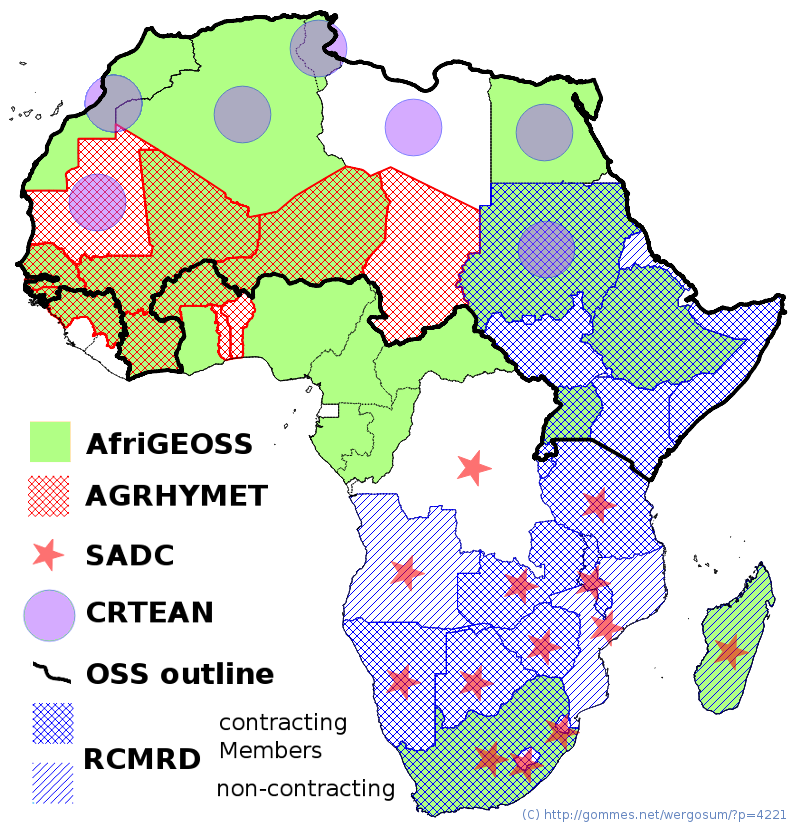 African regional geomatics groupings. In addition to the countries shown in the map, SADC also includes two Indian Ocean countries (Mauritius and Seychelles) while Cape Verde (off the Senegalese coast) is a member of AGRYMET. The OSS outline includes only the African members of the Observatory. Liberia,Sierra Leone and Equatorial Guinea are not members of any of the listed groupings.

AGRHYMET (AGRometeorology, HYdrometeorology and METeorology) in a regional centre based in Niger and established by the Permanent Inter-State Committee against Drought in the Sahel (CILSS), a regional development association grouping thirteen west African countries covering the Sahel and part of the Gulf of Guinea. From 1974, during the Sahelian drought period, AGRHYMET has played and continues to play a central part in the provision of services based on the analysis of data from earth resources satellites, cartographic reference and monitoring products (administrative maps, vegetation indices, etc.). The centre also conducts research and issues advice and warnings focusing on agriculture, hydrology, agricultural meteorology and environment. It publishes a monthly bulletin on the agricultural situation and other documents on hydrology and plant health. All are accessible through its website.

4 The Sahara and Sahel Observatory (OSS)

OSS provides a platform for North-South-South partnerships and has operated and coordinated projects focused on transboundary water resources, environmental monitoring and climate change.

5 Regional Centre for Mapping of Resources for Development (RCMRD)

RCMRD was established in Nairobi, Kenya, in 1975 under the auspices of the United Nations Economic Commission for Africa (UNECA) and the then Organization of African Unity (OAU), today African Union (AU). RCMRD is an inter-governmental organization and currently has twenty contracting Member States and four non-contracting members in the Eastern and Southern Africa Regions and the south-western Indian Ocean.

RCMRD generates, provides and disseminates Geo-Information and ICT services and products in Remote Sensing, Geodesy, Cartography etc. but has recently developed into a demand-driven provider for a vast array of services in natural resources and environmental management.

SADC is a regional development community covering fifteen member states from central Africa to southern Africa and the south-western Indian Ocean. It operates three centers which are of relevance for the present overview, starting with (1) the Climate Services Centre (established in 1990 as the Drought Monitoring Centre). The centre provides operational services for monitoring and predicting extremes in climate condition, including meteorological, environmental and hydro-meteorological products. (2) The Regional Early Warning Centre which, together with National Early Centers, constitutes the Regional Early Warning System (REWS). It’s function is to strengthen the SADC mechanisms for conflict prevention. It provides inputs to the Regional Vulnerability Assessment & Analysis Programme (RVAA) and its main focus areas of nutrition, information Management, urban assessments and the Integrated Phase Classification (IPC) for food security. (3) The Food, Agriculture and Natural Resources (FANR) Directorate deals mostly with agricultural and natural resources, including food security, transboundary livestock and crop disease control and wildlife management.