The adoption of new Information and Communicatons Technology (ICT) at the macro and micro levels in Africa and elsewhere is closely linked to socioeconomic growth and development (Obijofor, 2009).

To a large extent, the rapid – phenomenal  (Nyaki Adeya, 2001) – penetration of modern communication technology in Africa can be linked to the fact that population density is very low in rural areas and land lines are usually not existent. According to Linard et al. (2012) 90% of the population is concentrated in less than 21% of the land surface and the average per-person travel time to settlements of more than 50,000 inhabitants is around 3.5 hours. Cell phones do thus efficiently and cost effectively contribute to reducing the isolation of rural populations. 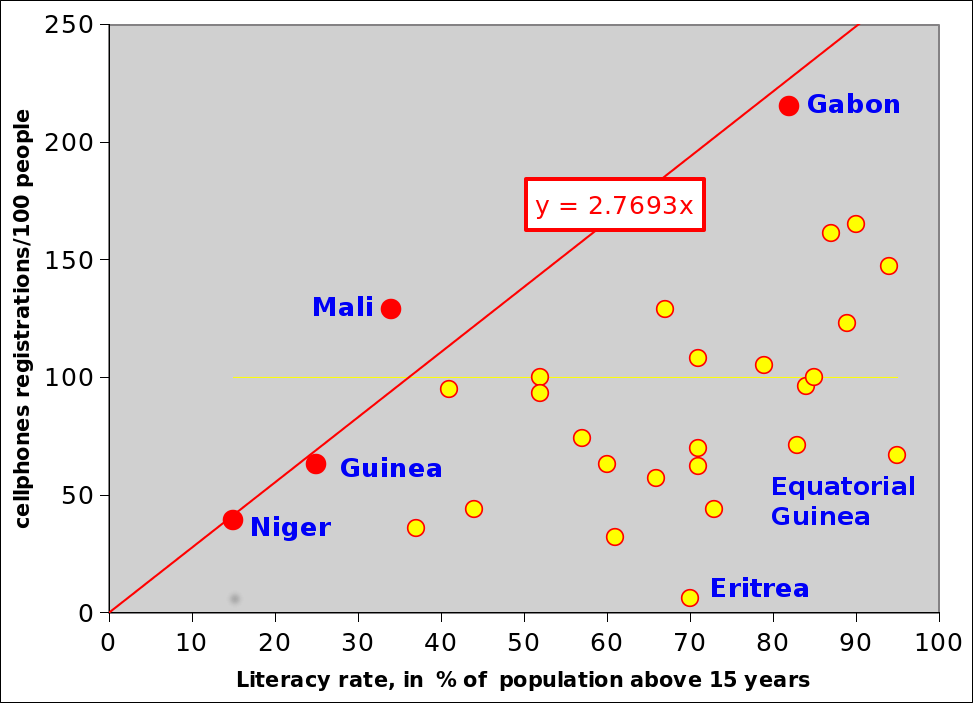 Source: http://data.worldbank.org/indicator/IT.CEL.SETS.P2/ and http://data.worldbank.org/indicator/SE.ADT.LITR.ZS as of 20150108. For literacy rates covering people aged 15 or more, the highest available number between 2010 and 2013 was taken. It is also stressed that literacy and cell phone penetration statistics do not cover exactly the same countries. Only countries that occur in the two datasets are shown.

World Bank data indicate that worldwide mobile cellular subscriptions for 100 people averaged 103 in 2013, comparing with a literacy rate of 85%. In Africa, cell phone penetration averages 78 subscriptions for 100 people, with a literacy rate of 66%. Of course, there are large disparities among countries (Nyaki Adeya, 2001), with high values associated with oil and diamond producing nations and low values (< 50%) confined mostly in the western African Sahel and other countries where literacy rates are below 50%. The group includes two of the most populated African countries: Congo DR (44% cell phone penetration) and Ethiopia (27%). 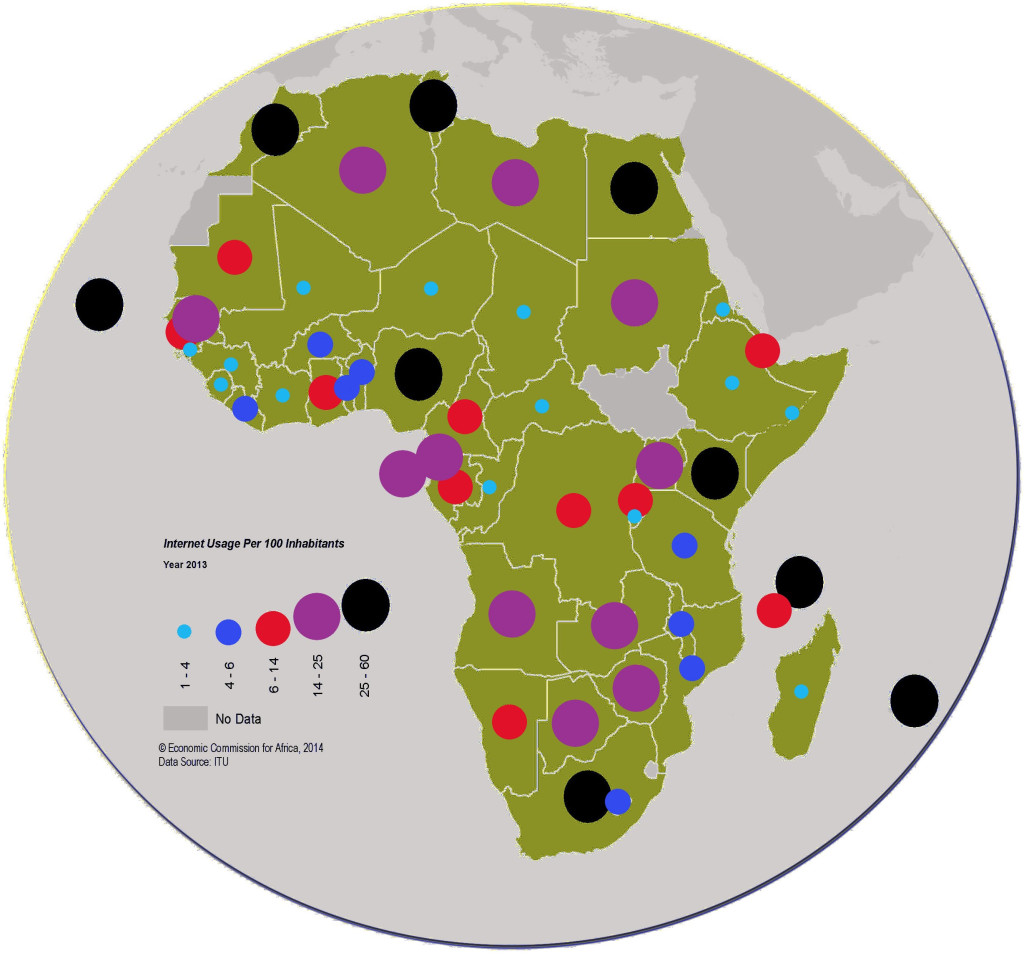 Internet usage per 100 people in 2013. Modfied from http://www.uneca.org/acs/pages/geo-information.

International Telecommunications Union (ITU) and Wikipedia indicate that internet was used by 5% of the population in 2007, with large differences that mostly parallel cell phone penetration: in about 70% of countries internet reaches less than 5% of the population, with only eight at or exceeding 10% (Algeria, Egypt, São Tomé and Príncipe, Zimbabwe, Tunisia, Morocco, South Africa). Mauritius and the Seychelles had the highest internet penetration with 27% and 39%, respectively). Six years later (2013) 20 countries have more that 10% of their population accessing internet, with Morocco, Seychelles, South Africa, Tunisia, Kenya and Mauritius at or above 40%, so that currently (2013) internet users make up 16% of the African population. This compares with 75% in Europe, 46% in China and 84% in the US. However, the average growth rate of internet connections in Africa has reached 1030% between 2000 and 2008, including mind-boggling 46-fold increases in Somalia and 49-fold in the Congo DR. As a result of the rapid development of ICT, Africa is now confronted with some of the issues affecting most countries in the world, such as cyber-security (UNECA, 2014).

In 2014, the UNECA vision about geo-information4 is to ensure that spatial data (and information products) permeate every aspect of society and that they be available to people who need them, when they need them, and in a form that they can use to make decisions with minimal pre-processing (UNECA, 2008). Altogether, the general data and communications infrastructure, applications and their level of sophistication are developing fast in Africa, as demonstrated by the document repository on the Information Science and Technology (IAS-Africa) website

Obijofor L 2009 Mapping theoretical and practical issues in the relationship between ICTs and Africa’s socioeconomic development. Telematics and Informatics 26:32–43