The idea for this note started with an email from Eric, where he expressed his surprise, and his disagreement, with a post in  The Atlantic about How Forks Gave Us Overbites and Pots Saved the Toothless: “They say that in the tombs dating from before the invention of pots, there are no toothless skulls. The author concludes that pots, which are used to make soft food, also permitted toothless people to survive. Would it not be more realistic to assume that the soft food was a cause of the loss of teeth. Maybe the fact that there were no toothless people in the tombs just means there were no toothless people?” Jacques, the historian on duty, confirmed: Teeths provide  a simple way to recognise the social status of Etruscans; the poor had healthy but chipped teeth (because the coarse flour used to contains small stones), while the wealthy people’s more refined diet resulted in them losing their teeth because they ate no hard food.

The funny observation is that overbites seem to be a rather recent phenomenon possibly confined to humans with a “modern” lifestyle (regardless of ethnic origin), and well  described by about any picture showing a smile! The  teeth of the upper jaw and those of the lower law are not always aligned vertically; instead, the upper jaw protudes horizontally by some millimeters (called the “overjet”) and the upper teeth “hide” the lower ones by some millimeters too (called, the “overbite”). The post in The Atlantic states that: What changed 250 years ago was the adoption of the knife and fork, which meant that we were cutting chewy food into small morsels before eating it. Previously, when eating something chewy such as meat, crusty bread or hard cheese, it would have been clamped between the jaws, then sliced with a knife or ripped with a hand — a style of eating Professor Brace has called “stuff-and-cut.” The clincher is that the change is seen 900 years earlier in China, the reason being chopsticks.

We mentioned above that the overbite is characteristic of people using forks and knife or chopsticks. Let us compare this with other ethnic groups (below) who probably don’t use fork or chopsticks: historical photographs of two boys from micronesia and the Australian girl (recent photograph). None them displays an overbite.

In the next series of photographs, the African girl displays a marked overbite, but the two Indian persons, one from a northern minority and the other from southern India are both devoid of overbite. If The Atlantic is right, the first could use a fork, and the two Indian persons possibly use their hands without any “tools” when they eat.

Teeth (note 1) are typical of most vertebrates, but not of all: Frogs and adult birds do not have any, unlike reptiles and even some ancient birds known only by their  fossils remains. The teeth are also present in the mouth of many fish (note 2).  In all other Mammals, a variable degree of overbite is present, sometimes limited to some teeth in the anterior part of the mouth. The overbite is sometimes impressive  in lower vertebrates (see the smile of a crocodile below),  and in our “relatively closer relatives” the carnivores (illustrated below by a wolf.)

The overbite disappears in apes and our early homo ancestors

Surprisingly, the overbite seems to disappear  in our cousins the monkeys and the apes (see the chimpanzee and the Rhesus monkey), and quite clearly so in the ancient species of Homo.  The illustrations of the teeth of these oldest ancestors supports this statement for Homo erectus and the somewhat younger Neandertal man.

Why did the overbite disappear? We suggest that, because of the prehensile hand in primates, many functions of the teeth were taken over by the hand. But what functions? The incisors’ function is to  cut (through a vertical movement of the lower jaw) and to firmly hold an object that can then be pulled at with the hands. Somewhat impressionistically, the absence of overbite improves the grip we exert with our teeth on large, but particularly also on small objects that can be held delicately between the teeth.

An important component for the lack of the overbite could also be the ability to walk upright, which, incidentally, is also losely connected with the prehensile hand. This ability entails an important reshape of the skeleton and muscles. That of the articulation between the atlas and axis, balancing the skull, is possibly responsible or inevitably accompanied by differences of the conformation of the inferior jaws, leading to the closure of the overbite in ancient humans. What is well established is that the various systems in the body are inter-connected to form a single structural unit and that a pathological condition in one area can also affect other areas (Silvestrini-Biavati 2013) . For instance, there are connections  between teeth alterations and cervical vertebrae as well as posture (Arntsen & Sonnesen 2011, Silvestrini-Biavati 2013.)

The development of more sedentary habits, added to the ability of cooking food, milling grains and vegetables and politely using fork and knife (note 3) and chopsticks could have influenced the return of the overbite, but the mechanisms is far from obvious.

A different problem is that of the lack of all or several teeth: The absence of skulls lacking teeth in burials before pottery was developed, could reflect the fact that the death was frequent before the loss of teeth or that this conditions was not compatible with the style of life. On the other side, in a society of hunters, only outstanding  individuals were probably buried.

Why do some people have less teeth? To start with, some people are born with less teeth than the rest of us. This hypodontia  is present in quite a large number of genetic or congenital syndromes. In the great majority of the cases, it is a consequence of complex malformations involving the entire maxilla and the facial district, if not even the entire skull and the brain. Nevertheless, certain individuals congenitally lack some teeth, more often some of the permanent set.  Hypodontia can also result from the intervention of toxic or infectious agents during the fetal life, the congenital syphilis, the German measles, the use of certain antibiotics and other drugs between others. The defect involves more commonly the canine or the premolar teeth; a familiarity could be present.

Most people who are born with all their teeth lose them for some other reason: In addition to illnesses plaguing the world (and affecting the teeth), the prevalence of facial traumas involving 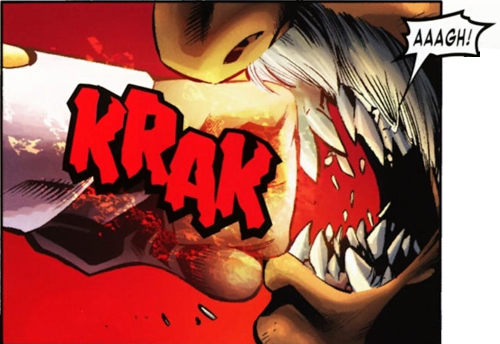 One of the more traditional ways of losing one or more teeth. Source:

damage to the teeth was estimated to be as high as 48% of all facial injuries (Gassner  et al 1999). In other words: when people fight, teeth will often be the first victims!

The teeth are also injured by using them as a tool, by carrying ornamental labrets, or intentionally adorning them with jewels and piercing, lining them and even avulsing them or otherwise damaging them for aesthetical reasons or superstitions. Click here for details.

It is very important to understand that the “return of the overbite” has nothing (or very little) to do with human “evolution”. The overbite is phenotypical, which is to say that it affects only the way we look, but it is not written in our genes.  If the children of the Micronesian boys pictured above use a fork or chopsticks, they will develop the overbite. On the other hand, if the descendants of six generations of Shanghai residents, all with overbites, stop using chopsticks, their overbites will disappear.   The overbite is an individual feature that develops or disappears as a function of eating habits. It is like muscles that grow when used, or a suntan that develop when fair skinned people expose themselves to the sun!

When we say “the overbite has nothing to do with evolution”, well, we should add some caveats… because there could be situations where some fork users have undergone a mutation that turns the overbite into a genotypic feature. This mutation would be neutral and it would go unnoticed in a population whith phenotypic overbites. If, for some reason (what about  volcanic or nuclear winter?) a population if forced to tear meat from bones the way we used to do it long ago, the people with a genotypic overbite might at a disadvantage compared with people who naturally reverted to the non-overbite. Another caveat relates to the growing body of literature about epigenetics which show, for instance, that the eating habits of parents affect obesity of their offspring (Adams 2008, Franks & Ling 2010). Maybe, after all, there is a relation between my parents habit of using a fork and my overbite!

We have not explained much in this post… apart from drawing the attention to this curious phenomenon of the disappearing and reappearing overbite. What could be the influence of these modifications in the future of human alimentary habits is difficult to infer, due to the multiple factors involved in teeth care, use and manipulation in the human species.

Note 1: The true tooth, i.e. the dermic derivative with its own blood supply and innervation, represents a relatively recent invention in the phylogenesis of animals.

Note 2: There are basically two types of “fishes”: teleosts, or “true fishes”  like carps and barracudas (characterised by their “spiny bones”) , and cartilaginous fish (sharks and rays) with “soft bones.” Teeths are very different in the two groups. As usual, Wikipedia has the details. Shark teeth are covered here in detail.

Note 3: It seems that in Europe, using a fork has as much to do with fashion as with hygiene!

Note 4: The history of dentistry is intriguing. The art of dentistry has its origins in very ancient time, in ancient Egypt, China and Japan it was fully developed. Both the Etruscans and Romans had advanced techniques for the construction of prosthesis, bound with silver and gold, and a complete set of ten instruments for the dentist is described here by Longfield-Jones (1984).