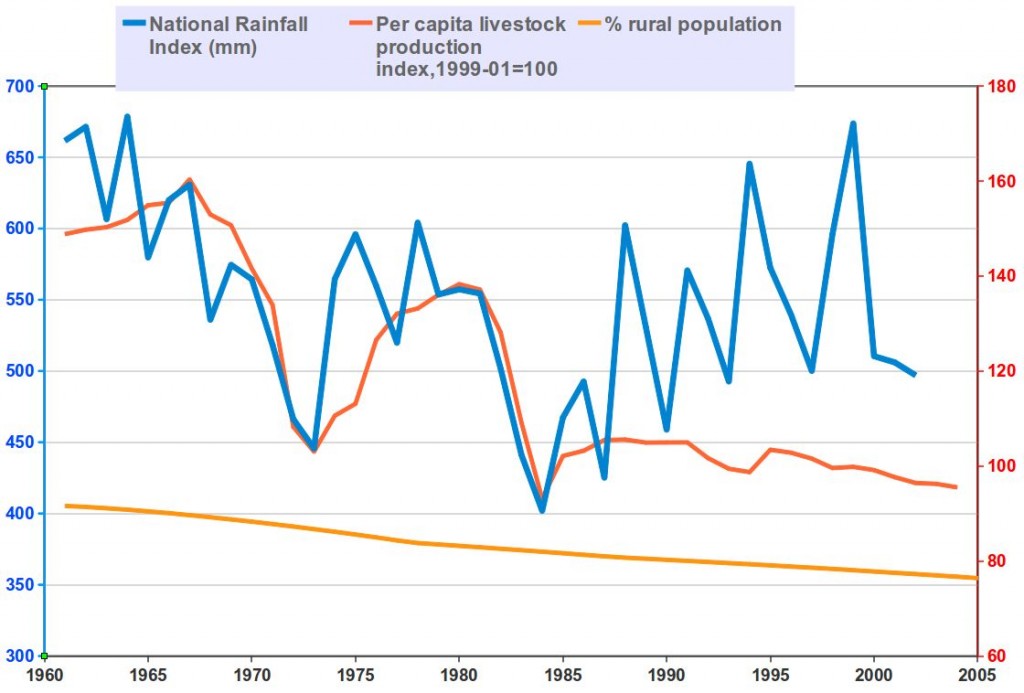 The graph shows recent trends of climate, urbanisation and a livestock production index (meat and milk). The data stem from various FAO sources: FAOSTAT for the production and population data, while the National Rainfall Indices (NRI) come from CLIMPAG. All variables are aggregated at the level of the “central-Eastern Sahel” by combining data from Mali, Niger and Chad.

The NRI was developed by (Gommes and Petrassi (19941) to provide a simple way to compare climatic conditions at the national level with other socio-economic indicators available at the same scale . It has been adopted for many studies outside of FAO. The NRI is a national average of annual rainfall weighted in a way to give more importance to areas that are favourable to agriculture. For instance, in the three Sahelian countries covered here, virtually no weight is given to the northernmost Saharan areas which receive almost no rain.

The NRI curve shows recent fluctuations in the Central-Eastern Sahel since 1961, when the well documented drought started affecting the region. Rainfall decreased, with marked inter-annual variability, until the first peak in the Sahelian drought that occurred in 1973. Per capita availability of livestock products kept decreasing in parallel to decrease in rainfall, but started recovering, in relative terms, after a run of comparatively good years occurred around 1975. Of course, at the rate of one calve per cow per year, livestock populations built up only slowly, so that it took about 10 years before populations recovered.

After 1980, a series of bad years culminated in the absolute worst drought year in 1984. As a result livestock populations collapsed again over a couple of years, reaching their lowest level in 1984. 1988 was the first “good” year in the Sahel after more than ten years of difficult conditions. Floods occurred from Dakar to Khartoum, and a major locust invasion had no serious impact on crop production because of the unusually favourable rainfall. Since 1988, rainfall averages have been comparable to those that occurred during the pre- and early sixties years, albeit with larger interannual fluctuations. The difference is also that human populations have increased over the recent 40 years, so that the availability of livestock products actually never recovered: they are now just above half what they used to be in pre-drought years. In parallel, more and more people moved to towns, so that a smaller urban population has to feed a larger urban population!

Altogether, crop and livestock production goes on at about the same level of technology as forty years ago. Food production systems have survived the drought, but at the cost of significantly increased vulnerability to climate vagaries.