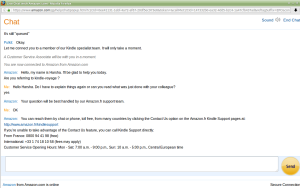 There’s ore than one link between the Kindle and China! Refer to this article in the Guardian!