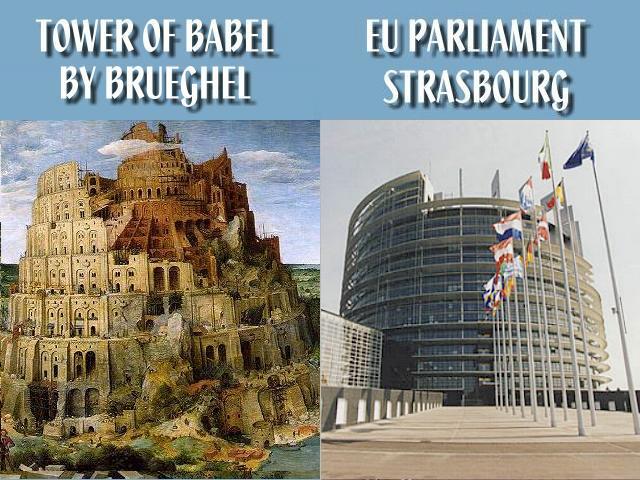 Also see the “sister post” on  EC/EU languages and UN languages – do we really need all of them? –

The other day, I was idling about on the website of the European Commission (EC), following the meanders of one of the 525 indexed items, when I must have clicked a wrong button in one of the darker corners. Was it under Defence industry? Terrorism? The information system for European public procurement? Or even the rather harmless Herman Van Rompuy site? The message I got told me that Dear usersof my kind would (unfortunately?) not be allowed any further, because whatever was beyond that point was “For Internal Use Only”. As expected, the warning came in twenty-two languages:

In reality, the message was much longer. I have simplified it by cutting out the first sentence, i.e. the portion of text that end at the first full stop in the English version. Since not all languages use a stop, I may have cut the text at the wrong place, for which I do naturally apologize to all readers who would have preferred the long version in FR, BG, ES, CS, DA, DE, ET, EL, IT, LV, LT, HU, MT, NL, PL, PT, RO, SK, SL, FI or SV. Note that I carefully maintained the order of the languages: it seems to have some hidden meaning which at first escaped me. Why is FR before BG and CS after ES? Does this have anything to do with the order of accession to the Union? Probably not, as NL should be at the beginning. Why is poor Luxembourg, one of the most European-minded countries in the Union not listed? Because they adopted the langauge of the southern neighbour (FR) as (one) their official language. They also have the same flag as NL, but this is apparently not a factor here. The truth is that not all animals (sorry, languages!) are equal: EN and FR are more equal than, say, MT or SL. I assure the reader that this discussion follows the highest standards of objectivity. Although only the EN text is given below in extenso, separated into the original four sentences for the sake of clarity, the complete text for all languages can be consulted as a PDF file by clicking here:

How do you like  We regret any inconvenience this restriction may cause to you? 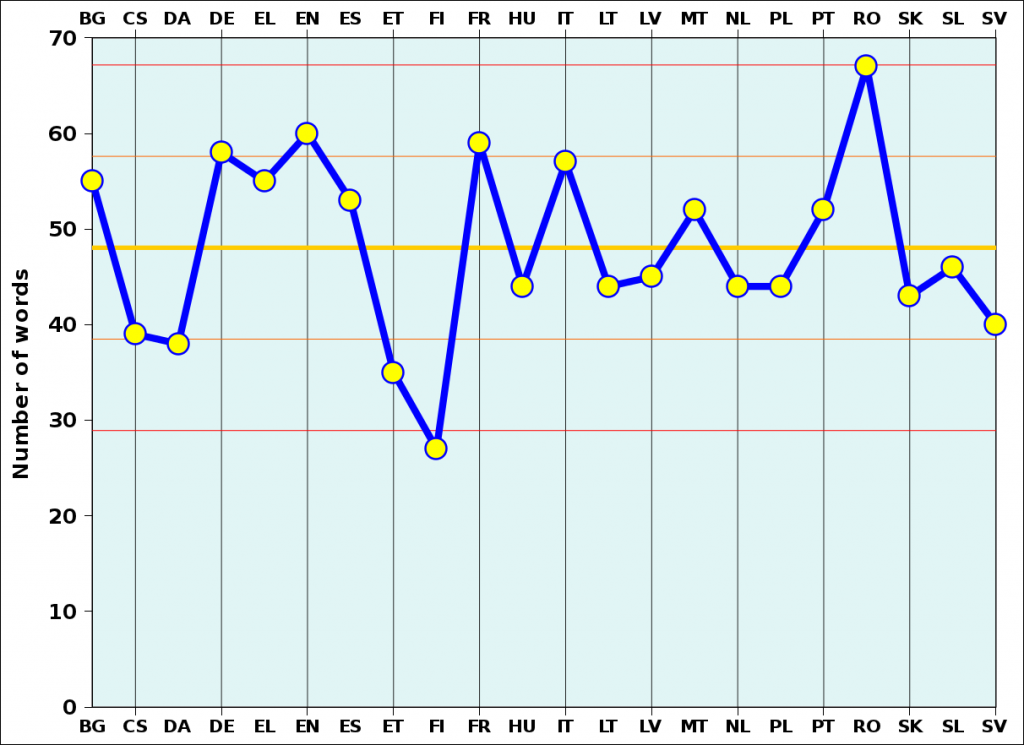 Number of words of the Dear User warning according to language. The horizontal lines indicate the average and 1 st.dev and 2 st.dev below and above the average. 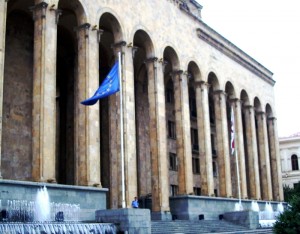 The parliamant building in Tbilisi (Georgia) with the EU flag.Photograph by Wergosum (August 2007).

What I like is that the EC offers EU citizens interested in language a nice opportunuty to revise their Lithuanian (probably LT), compare it with Maltese (MT?)  and admire the fonts, grammar and vocabulary of 22 European languages. There is, indeed, a number of important conclusions to be drawn from the comparison of the languages. For instance, the most efficient language is FI, with only 27 words, and the most verbous one is RO with 67 words. Of the large countries, FR, DE and EN are about equally verbous (59, 58 and 60 words, respectively) to be compared with the average of 48.04 (st.dev: 9.56). PL, another large country but a relative newcomer in the EU club, beats the founders with only 44 words. But there is much more to be learned from the comparison. For instance, some languages are more polite than others: IT, PT, FI and SV lose no time to politely address the Dear User. Instead, they directly state the problem. Shall we assume they are the most direct languages in the EU?

Another lesson is that some languages don’t have a word for “back” (DA, ET, LV, NL, RO, SK, SL, SV?). Does this mean they are the countries that are pushing Europe ahead, hopefully beyond the no-return point? Unfortunately not for all of them, as DA, for instance would so much like to reestablish border controls… I eventually understood that the EC, being one of the most active standardization machineries worldwide (Note 2) has used ISO codes for the languages and that they are different from  ISO country codes. Both are listed in the following table, which also includes some languages and countries hat may (hopefully!) eventually join the Union. Be prepared for some surprises.  For instance,   the code for Ukrainian is UK. Imagine the poor UK citizens who will desperately try to read “dear User” in Ukrainian.   Or the Armenians who will look for AR or possibly AM, when he should go for HY. The same applies to their Georgian neighbours confronted with KA. Mind you, those codes apply to traditional western languages. There is also a Cyrillic version, and a Greek one, not to mention the Armenian and the Georgian variants. I am sure you can see the nightmare as well as I do! The case of Georgia and Armenia is interesting: the first is a European country that somehow by mistake (whose mistake?) found itself on the wrong side of the Black Sea. Armenia is sandwiched between Georgia and Turkey, a somewhat unconfortable position. I personally believe we should accelerate the accession to the EU of Turkey: Turkey (or would you prefer TR?) is a country of European culture, it has one of the fastest economic growths in the world (second only to China) and it will reactivate the sleepy Union. And if Turkey joins, we’ll be able to include Armenia and Georgia.

Allow me to make some proposals which the people who have prepared the Dear User text “may wish to consider”  in order to reach a larger circle of potential Dear Users. For instance, what about retired navy personnel who spent their lives sending messages from ship to ship using the flag coding? Flags are colourful and they will no doubt attract butteflies and children in addition to retired seamen. Judge by yourself:

Then we have many lovers of pretty fonts, such as the devanagari script used in Hindi. Many people, including myself, do not understand hindi, but we nevertheless like the script: no problem, we can just transliterate the Dear User warning using devanagari, or the Arabic script. Of course Hindi and Arabic speakers may be disapppointed, but just think of all the people out there who are impressed by the variety of languages used by the EC: they will be even more impressed by the exotic look of the script, and they shall no doubt admire the EC for being so forthcoming and ready to please even the most remote Dear Users. An endnote in true Hindi or Arabic could e added suggesting that Hindi and Arabic speakers should be so kind and learn one of the 22 EU languages, which is a generous offer indeeed, considering the large choice of languages available. Maybe the note include the sentence saying We regret any inconvenience this restriction may cause to you? It would be a pity to have developed so nice a sentence and concept without recycling it for a good cause.

Transliteration of the Dear User text into devanagari. http://utilities.webdunia.com/hindi/transliteration.html

Who has seen The Book of Eli? The film offers ample justification to use Braille coding to make sure no-one will steal the Dear User message from you…

The EC should also include Morse coding. This is not only ornamental or a kind attention for music lovers: imagine your screen breaks down at the very moment when you clicked  Defence industry,, Terrorism, The information system for European public procurement or even the rather harmless Herman Van Rompuy site? If you heard this, you would know that the Titanic is still afloat, that Billy the Kid did not cut the telegraph line, and that Bismarck is still there watching over the destiny of Namibia! Let’s be serious! It is about time the EC made up their minds and did something about languages in the EU. If the Belgians were able to form a government, if Bhutan decided to teach English in primary schools, if Israel revived Hebrew for everyday use… there is no reason Europe cannot adopt Esperanto!

Contrary to some other EU languages, esperanto has  a “back button”. It is also a very polite language that has no difficulty whatsoever in addressing all EU citizens as karaj uzantoj (plural). In the long run, esperanto is a great investment! You will agree that a “back button” is a major asset for a language in the EC website context. Turkish, again, does have such a button. I know that individual EU citizens  have little chance to make their voice heard in EC fora, and my support for Turkey has been, until recently, a private position that did not go beyond wishful thinking. But now I have a major contribution to offer to one of the fundamental pieces of EC official literature, i.e. the Dear User text. I generously donate the Turkish Dear User version to the ad hoc sub-committe in the European Parliament:

Thanks to Giovanni M. and Yasar for providing this Dear User version in Turkish

The time has come to return to Strasbourg, as promised at the beginning of this post. We all know that, unfortunately,  European history has been plagued by North-South and by East-West wars, of which the recent history (arbitrarily starting with Napoleon and ending with Hitler) is just the lastest episode. I could have mentioned Francis I of France (François 1er) and Charles V (king of Spain and “holy Roman”German Emperor; Note 3). Strasbourg is part of that “central strip” of land that goes from Basel in Switzerland to Luxembourg to Eastern Belgium to Maastricht which has been a buffer between the West (France) and the East Germany starting with the immediate successors of Charlemagne in the 9th century. It is very ironic that one of the earliest known texts in “German” is the translation of one of the earliest text in French known as the Oaths of Strasbourg. The document is a “deal”between Louis the German  and his brother Charles the Bald (king of France!) in which they agree to get rid of the man in between, i.e. their brother  Lothair, the ruler of the “central strip”. The text is given below. You will agree that, given the circumstances, esperanto is, again, the appropriate language:

What can we conclude? Well, to start with, that the Latin saying nihil novi sub sole (Note 4) applies: when Europeans have a common objective, such as getting rid of the man in between, language never was an obstacle. Our problem right now is that we seem to have lost the common objective. The twenty-two languages is a symptom of our provincialism. Can’t we be Europeans? Can’t we create a EU citizenship that could relieve Belgians from being Flemings or Wallons, the Spanish from being Catalans or Galicians? Can’t we agree on one language?

Note 1: Just as there is “international English” in the UN, there is also “EC English” which many commentators have made fun of! See, for instance, this page on the site of The Economist.

Note 2: One of the things they did not standardise is wall sockets and plugs!

Note 3: A rather interesting period, as the king of England was Henry VIII! Francis put pressure on the eastern side of Charles by making an alliance with the Ottoman empire. Charles V tried to circumvent the Ottomans and sent Embassadors to China to that effect! It does not appear that the Chinese were convinced it was their interest to open a new front on the Eastern border of the Ottomans, or maybe the embassadors just never got their in the lifetime of Charles.

Note 4: Nothing new under the sun! Also observe that Latin is a language  without a country, a very desirable feature for a common European language candidate.