While writing the “fun” post below on Eurobabel, I collected some data on the actual use of European languages. Here is thus a more serious note about the importance of EU languages compared with UN languages, and their cultural weight compared with some reputedly “insignificant” languages such as Esperanto and Latin. Importance is, of course, an ambiguous term, one of those terms that are difficult to translate exactly, for instance between French and English. In French, the word important has three groups of meanings: (1) serious, essential; (2) arrogant, proud and (3) large, big. (1) and (3) are covered by the semantic fields of important in English, but (2) is not. In addition, (3) is much more common in French than in English. In French, for instance, I can say le barrage contient un important volume d’eau while the dam holds an important volume of water would be perceived as unusual in English. What about German? The word wichtig includes mainly (1), less frequently (3), and (2) only in composed words such as wichtigtun. Based on this little discussion, there is little doubt that French is the most important (2) of the European langauges, but what do actual numbers tell us?

Most UN organizations have adopted six official languages: Arabic (AR), English (EN), French (FR), Spanish (ES), Russian (RU) and Chinese (Mandarin: ZH). They are languages that are actually spoken by a large number of people, either as their mother tongue or as a 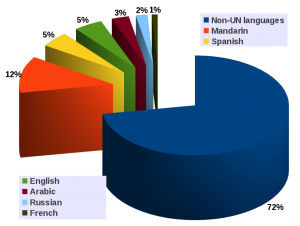 second language. The UN languages are spoken as the first language by  1920 million people, i.e. by about 28% of world population (which is expected to pass the 7 billion mark at the end of of October 2011). Chinese comes first (by far: 12%) followed by two langauges which have approximately the same importance (Spanish and English, 5%) and eventually by Arabic, Russian and French (3, 2 and 1%). The official UN languages were not selected because they are representative of the languages actually spoken, but for historical reasons at a time when EN, SP, FR and RU were ruling the world.

In the EU, we have 22 languages which sum up to about 1341 million of native speakers. If we include the non-native speakers, we find about 2500 million, which is roughly 34 %:  34% of the world population speaks a European language, but the EU population – just over 500 million in 2010 – represents only 7% of the world population (Note 1). This is the result of the economc weight of the US combined with a fair amount of colonial tradition (English and French). Not all Organizations use the same languages. FAO, for instance, added AR in 1971, while the UN added it in 1973. RU became an official language of FAO in 2006 after Russia joined the organization (the USSR  was a founding member of the Organization, but left it in the 1960s)! Also see this link.

How would the expansion of the Union change this? Turkish is, of course, a language that counts, with more than 50 million speakers. The remaining candidates and potential candidates are all at a level that is comparable to or less important than Czech, Swedish and Lithuanian. In the same category, we even have such “languages” as Neapolitan and Bavarian. If Serbia and Croatia join, they might insist that what was known as Serbo-Croatian are, in fact, distinct languages. The worst would be that Montenegro could not live with Serbian or Croatian and that they would insist on having Montenegrin (according to Wikipedia, an incipient standardized form of the Shtokavian dialect of Serbo-Croatian) recognised as one of the official languages.

Can’t we be rational? If we cannot agree on English for obvious reasons of national pride and importance of some other national languages, we should settle for Latin or, better,  Esperanto! The argument that they are “minor” languages does not hold, because their adoption would turn them into instant “major” idioms. Both Esperanto and Latin are modern languages, i.e. their vocabulary is up-to-date; there is a word for computer, internet and they are, therefore, suited for our children the  electronic octopuses,  and their parents as well. Need to be convinced? Look up “Latin” in the Esperanto Wikipedia and “Esperanto” in the Latin Wikipedia!  Next, consult the entries for computer (Esperanto, Latin) and internet (Esperanto, Latin). Still have doubts? The language with the largest number of articles in Wikipedia is English (3760 k, i.e. 3,760,000), followed by German (1297 k) and French (1160k). Although I could not find exact counts, Esperanto is listed as having “more than 100 k”, which is at the same level as Portuguese, Dutch, Danish, Czech and some other EU languages. It is also 10 times more than Greek, Norwegian, Kiswaheli and Walloon. It is also more than Latin, which falls in the “more than 10 k” category. Languages with less articles than Latin include Corsican, Malagasy, Limburgs and West-Vlaams!

Note 1: all percentages are approximations, for a number of reasons. (1) The first is that the numbers given by Wikipedia (the main source!) refer to different years. Some of them are ten years old estimates. (2) The percentages have been computed  against a world population of 7 billion, which corresponds to the end of 2011. (3) Many people do speak more than one language, and there is no doubt a lot of double and even multiple counting.

Note 2: The lowest rank for the UN languages is Arabic with 0.5k.  Many languages listed above are spoken mainly in developing countres (SP, AR), but there is no such excuse for the 21 EC official languages that have not been very active so far.

3 thoughts on “Are all EC and UN languages really needed”